A moment’s thought on the subject of sheep. Like most reasonable people, I hate meetings and this morning’s session was no exception.

Today’s ordeal was that bit harder to bear because the morning was such a good one. I’d had to drive over the Preselis on the way and they had looked picture-perfect; so much space, sunshine, rising mist and, to add detail, some sheep.

As the meeting dragged on I was busy imagining an escape to the sunlit uplands, and was beginning to put together a blog post; working title: ‘Which farmer?’ However, when I actually sat down to write I had a quick look at Mark Avery’s excellent blog – and found that he’d mostly beaten me to it.

There’s been a lot said, and written, recently about future landscapes, rewilding and what farm payments might look like after Brexit. Clearly farmers have to be part of this national conversation, but all too often that just means giving air-time (or page space) to the NFU.

Mark hits the nail on the head when he says: “Just because a barley baron and a sheep farmer both live in buildings in the countryside called farmhouses doesn’t mean that their business interests coincide.” Farms come in all shapes and sizes.

I’m a rewilding enthusiast and I’m delighted at how quickly that idea has moved to the heart of things. Much of the credit for that has to go to George Monbiot, who argues his case with passion and clarity.

I take George’s point that Britain’s uplands have been ‘sheepwrecked‘, with past over-stocking doing all sorts of damage. But I don’t have much enthusiasm for a sheep-free future that fails to take account of culture and history.

Gareth Wyn Jones does a good job putting the hill-farmers’ case, and it would be good to hear more creative thinking from him, and from 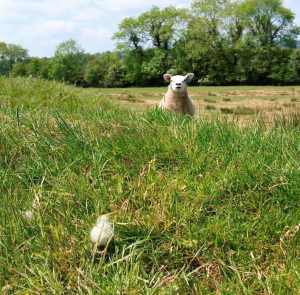 his colleagues. Hopefully BBC Radio 4’s new series ‘Against the Grain’, which starts on Monday, will be giving hill-farmers a platform.

Billed as an investigation of the current state of the industry, its presenter is Charlotte Smith of ‘Farming Today’. Over the years she must have met just about every farmer in Britain, so I’m sure the programme will have input from all sorts – not just the NFU barley barons.